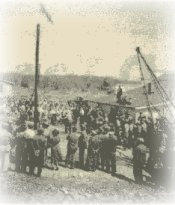 Ozark Border Electric Cooperative was organized in May, 1938 by a group of concerned citizens who saw a need for electric service in our area. In just over seven decades the Cooperative has greatly expanded and currently serves 40,500 services in 11 Southeast Missouri counties. The Cooperative, like many other cooperatives across the nation, was formed to provide electric service to areas where private power companies and municipals did not want to go because of the financial commitments and concern for profitability. As cooperatives developed and the consumer base grew, private power companies and municipals then became interested in the developed areas of cooperatives — after the local efforts had proven it could be done.

Ozark Border has grown through the years because of the dedication of its boards of directors and the hard work of its employees. With its roots in the communities it serves, the Cooperative has always put its concern for the electric needs of the consumer first. At Ozark Border, we truly are owned by those we serve.

The Benefit of Membership

The Cooperative's members are actually owners. The benefit of belonging to a cooperative is that, as a consumer, members share in the quality of service and in lower rates. As an owner, each member's investment is returned in the form of capital credits. The Cooperative exists in order to provide service to its members; however, it must make a profit if it is to continue to exist. Any year in which the Cooperative has revenues greater than its expenses, a portion of revenue that exceeds expense is referred to as margins or capital credits. Those margins are assigned to members receiving service during the year in proportion to the amount each member paid during the year.